How to prune peach trees

Times of the year and methods

What is the purpose of pruning peach trees? It depends on the current stage of the plant’s life cycle when you perform pruning. When pruning immature peach trees, i.e. during the growth stage, you need to guide and support the rapid formation of the tree’s foliage-bearing structure. Whereas, in the plant’s production stage, pruning maintains the balance between the development of branches and leaves and the production of fruit, to ensure a good quality harvest at the end of every summer.

The peach production stage begins when the tree’s structure is fully formed, around 3-4 years after planting. Adult peach trees with a shape formed by conventional “open-centre” pruning—which is suitable for gardening enthusiasts or for a family peach orchard—have a skeleton made up of the trunk and three primary branches (attached directly to the trunk) about 3.5 to 4 m in length and inclined at an angle of 35-40°.

Do you want to harvest large, colourful and tasty peaches with no signs of rot? If so, read on: in this article we talk about pruning adult peach trees, including how and when to prune.

Tree branches produce fruit and buds only once in their lifetime, during the second year. Thereafter they only serve as a support for new branches that develop from the shoots, which in turn will bear fruit only for one season, and so on. Strictly speaking, branches should be described as productive until they are one year of age, and non-productive from the second year onwards. This also applies to peach trees.

In general, when pruning, it is very important to distinguish productive branches (those that will produce fruit, new branches and leaves) from those that have already produced in previous years. It is equally important to recognise the different types of young branches, i.e. those who will produce:

When carrying out production pruning, check the peach tree’s development to ensure that light and air can access the inner parts of the foliage and to prevent trees from impeding each other, if you have a peach orchard. Furthermore, the peach tree’s foliage moves upwards toward the top of the tree as it matures, leaving the lower parts of the plant bare. However, you can protect against this by pruning.

So, to correctly prune a peach tree, start pruning from the top of each primary or secondary branch, choosing the mixed branch that will be the outermost tip and cutting off the rest, so that you leave only lateral branches that increase in diameter and length from crown to base. Lateral branches must be thinner and shorter than the branch on which they grow: ideally, you want to obtain a branch with a herringbone shape. That way, you prevent the productive parts of the plant from creeping upwards and obtain balanced foliage with sufficient space and light for each branch, including those lower down. This enables you to grow quality peaches and leave next year’s productive branches intact:

What is a reduction cut? It means cutting a branch back to a lateral or younger branch that is around one-third the diameter of the cut stem. For winter pruning, carry out reduction cuts on the branches, but don’t do any trimming or shortening.

Want to know more about reduction cutting and how to do it properly? Check out this blog article on how to prune a tree.

Summer pruning (also called green pruning) of peach trees involves removing the most vigorous shoots (future suckers), especially those growing on the back of branches. Doing this ensures that you avoid getting excessively thick foliage—which acts as a barrier to light and air—and facilitates the maturation of the peaches. In addition, effective green pruning saves you some winter pruning work. By contrast, not doing summer pruning leaves you having to catch up with drastic pruning in winter, which can cause excess vegetation to develop, hindering production during the following season.

Peach trees produce lots of fruits but to achieve quality production, some will need to be sacrificed. Before the peaches ripen, while they are still firm and walnut-sized, thin the fruits with a pair of shears, leaving about 4 fingers of space between each fruit and keeping more on the best and most exposed branches.

How to prune peach trees: tools

You can also work with power tools such as a pruning chainsaw or, for pruning at height with maximum practicality, pruners. To cut bigger branches you can opt for a petrol engine pruning chainsaw like the Oleo-Mac GST 250, with 1 kW rated power, compact dimensions, low weight (2.7 kg) and a 25 cm solid professional guide bar tipped with Stellite®, a highly wear-resistant alloy.

Whether manual or motorised, be sure to clean your pruning tools regularly—for example by disinfecting the blades with bleach or alcohol—so as not to spread any diseases between plants. 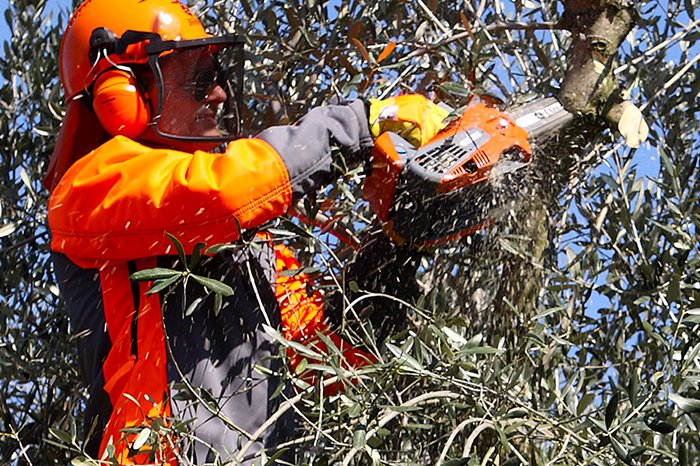 When to prune peach trees: the best time for production pruning

When a peach tree enters its production phase, winter pruning and summer pruning must be performed every year. But what are the best periods for pruning peach trees?

Schedule winter pruning of your peach trees after January until flowering, or bring it forward to between early September and early October, provided that you stop before the rain and cold arrive. What is important is that you avoid pruning peach trees in the autumn, specifically between late autumn and early winter, because this can cause branch cancers and lesions due to fungi.

Instead, you can perform summer pruning on your peach trees at the same time as fruit thinning—an essential activity that we mentioned above—or in July.

Are you interested in knowing more about pruning? So, why not also our article on “All you need to know about pruning”.