Keeping moles out of the vegetable patch and garden: effective remedies

Tell-tale mounds of earth in your backyard? Here's what to do

Moles are solitary animals that live everywhere from low altitudes to alpine areas, in cultivated land, vegetable patches, gardens, lawns, pastures and woodland. Here in Italy there are several species, including Talpa europaea, T. caeca and T. romana. Moles dwell underground using their strong front legs and claws to dig burrows and tunnel networks, which they use to move around and hunt. They are predominantly insectivores, feeding on insects, larvae, worms and snails, but are also known to eat small vertebrates such as amphibians and reptiles. They have very poor eyesight, but also very acute senses of smell and hearing.

Although moles don't hibernate, their digging activity is more noticeable between spring and autumn, when it can create problems in the garden and vegetable patch. In winter, however, moles live and feed deeper down in the subsoil. They prefer quiet places without large roots, as well as soil that is loose (i.e. free from obstacles and easy to dig) and rich in food. In this article, after talking about the damage made by moles in the garden and vegetable patch, we will explain how to prevent and eliminate these tireless tunnellers.

Moles in your garden and vegetable patch: the damage they cause

You’ll immediately recognise when you have a mole in your garden: the molehills are an unmistakable sign. Whenever moles dig tunnels, they clear a pathway by pushing the displaced soil upwards out of the ground. The damage they cause to lawns is mostly cosmetic: imagine a pristine lawn in an English garden dotted with mounds of earth!

In addition, molehills make lawn maintenance more complex and laborious by turning turf into a slalom course that impedes larger gardening equipment, such as garden tractors, and which can damage lawnmowers and brushcutters. Not even levelling these mounds by running over them with a tracked transporter can solve the problem.

In the countryside and vegetable patch, moles cause even greater damage. By digging tunnels just below the surface they can damage the roots of plants by tearing them or depriving them of soil (and therefore nourishment). Many people believe that moles eat vegetables, roots, bulbs and seeds in the vegetable patch and garden, but this is not true. As we said before, they are insectivores. Such damage is instead caused by rodents such as mice and voles, which exploit mole tunnels to raid gardens.

How to get rid of moles from the garden?

Rather than killing moles, we recommend keeping them away from the garden, vegetable patch or orchard by relocating them at a suitable distance (at least 500 m), where they cannot cause damage to lawns and plants. You can do this by capturing them with non-lethal traps and releasing them elsewhere, or by diverting their burrowing away from your property.

If you decide to kill them, you can purchase lethal traps (e.g. with blades or spikes) and poisonous bait (talpicide). But we prefer not to harm these animals, which are useful in their own way. Instead we suggest trying to peacefully coexist with them. After all, moles are solitary and therefore unlikely to cause an infestation. Why not live and let live?

But how can you repel moles without killing them? How can you deter them from coming near the garden or vegetable patch? How can you make these areas inhospitable? There are several methods that you can use on a continuous basis and even in combination with each other. They are based on a simple principle: disturb the creatures using smells, noises etc. that they don't like. 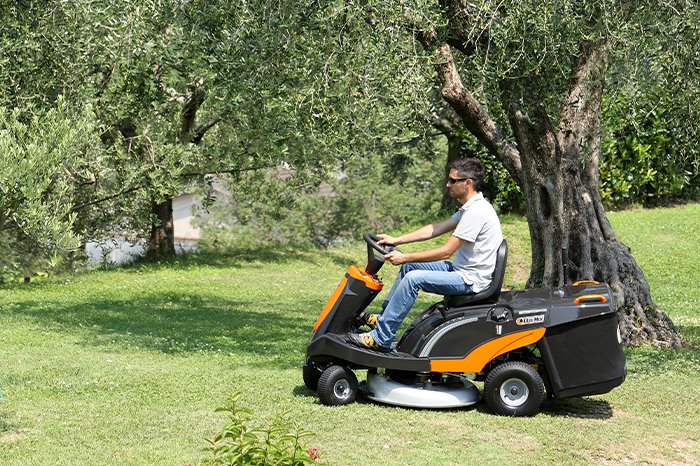 Before putting these methods into practice, identify the moles’ range of activity, i.e., the area where their tunnels are concentrated (they are creatures of habit). To repel them you should target these routes, driving them away from where you don’t want them to dig and forcing them to divert their burrowing towards other directions.

Here are some remedies to use against moles:

We said before that moles in the vegetable patch and garden are useful in their own way. By hunting insects they rid the soil of pests and larvae (unfortunately they also feed on earthworms, which are themselves very beneficial for soil). In addition, their digging aerates the soil, making it looser, more permeable and therefore more fertile (similar to what happens when you dig the soil or work it with a rotary tiller: by the way, here you can find an article about tilling soil and an overview on how to grow a vegetable garden).

Once you have chased the moles away from your garden, your lawn needs to be restored by removing the molehills and filling in the tunnels, sowing grass or covering the area with ready-to-roll turf (here are some instructions for laying rolled turf). Take care of your lawn by cutting it (mowing the lawn in summer requires some precautions) and, when necessary, removing thatch through scarification.

A unique solution for different types of treatments.

Fruit plants: here's how to grow them in the city

Why does your chainsaw cut crooked? Causes and remedies

Good maintenance and technique are key