This is why your chainsaw floods and won’t cut

Does your chainsaw fail to start and you don’t know why? There could be various causes: incorrect fuel mixture, carburation not calibrated properly, or a wet spark plug.

In spite of their power and robustness, chainsaws are actually rather delicate machines that require careful and precise maintenance at every stage of their life cycle. Neglecting to look after a chainsaw can lead to malfunctions such as flooding. Let's look at the factors that cause flooding and the most effective ways of preventing and fixing it.

The mixture contains the wrong ratio of petrol to oil

The first factor to evaluate when your chainsaw shows no signs of life is the petrol-oil ratio in the fuel mixture.

A mixture that is too lean (i.e. low in oil), could cause the engine to seize up due to poor lubrication. On the other hand, an over-rich mixture (with too much oil) generates a smoky exhaust and residues inside the spark plug, in the combustion chamber and near the cylinder, increasing the risk of ignition problems and associated damage. 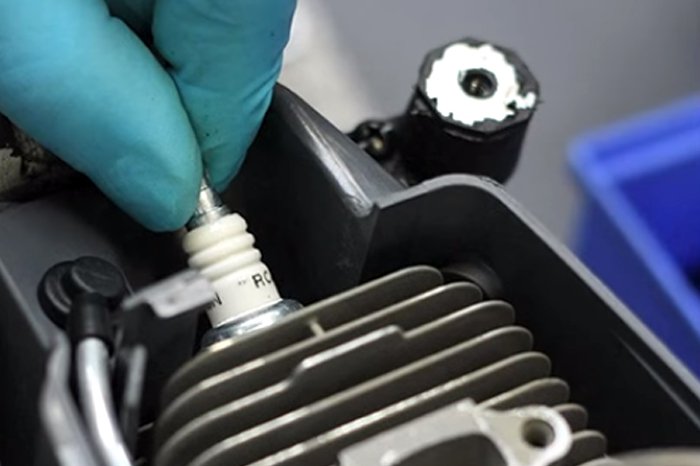 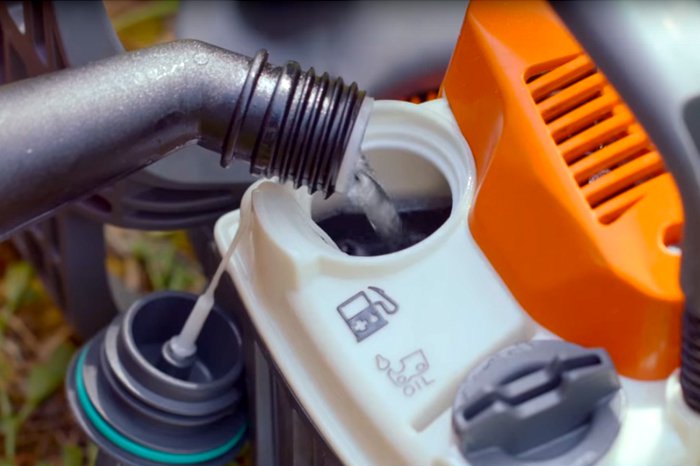 Moreover, if you are making up the fuel mixture yourself at home, it’s generally always better to choose specific oils that help reduce polluting emissions and prevent encrustations from forming on the cylinder, spark plug or piston.

If you own a petrol engine chainsaw with a two-stroke engine like the GS 370, for example, you can prepare mixture using unleaded petrol and special PROSINT 2 EVO oil. If, on the other hand, your chainsaw has a 4-stroke engine (even though almost all chainsaws have 2-stroke engines these days), opt for OLEO-Alkilate and SAE 30 oil, which are both formulated specifically for this type of engine.

Follow the instructions recommended by the manufacturers to work out the oil ratio needed, and avoid mixing it with the petrol directly inside the tank. Always choose a recently prepared mixture.

If you don’t want to risk preparing mixture yourself, you can always buy ready-made fuel such as OLEO-Mix Alkilate: a formula for 2-stroke engines that is obtained from alkylate petrol and biodegradable synthetic oil, which protects the environment while ensuring high performance.

This type of compound ensures numerous advantages: first of all it doesn’t require the fuel delivery system to be emptied once you finish work. Secondly, it doesn’t foul the spark plugs excessively, thus avoiding numerous issues when starting the chainsaw.

The carburation is improperly calibrated

Another step that you definitely need to pay attention to in order to avoid flooding is adjusting the chainsaw’s carburetor. If the revolution speed is too high, the engine may melt. So, if your chainsaw doesn’t work, try lowering the power output slightly by adjusting the engine screws. Make sure that the idle speed never exceeds the starting speed and try to restart it.

The spark plug is wet or faulty

You’ve followed all the previous instructions, but your chainsaw is still flooded. What should you do in these cases?

If you have properly mixed the fuel and have tried lowering the carburetion setting, but your chainsaw still won't start, the spark plug is probably wet or faulty.

When the spark plug doesn’t generate sparks, the fuel mixture builds up until it floods the engine’s interior, often resulting in leakage from the exhaust pipe. One tell-tale sign that a chainsaw has flooded is the smell of fresh petrol near the muffler.

To ascertain whether this is indeed the problem, simply disassemble the part, pull the starter cord as if you were switching on the engine, then dry it, reassemble it and try switching it on again.

If the machine fails to restart, the spark plug may be faulty and you will need to purchase a replacement plug.

Would you rather avoid chainsaw flooding altogether, rather than treating the damage after it happens? If so, use a special additive such as Additix 2000, which slows the degradation of the fuel, protecting it from oxidation for at least one year.