Chainsaw stops after starting? Here’s what to do

Chainsaws are an all-round tool worth keeping in the garage for use in the garden, home or (depending on the power rating) to perform the most demanding jobs: DIY, cutting up firewood, pruning and lopping down trees and shrubs. Sometimes you may find that your chainsaw doesn’t start, or it starts and then stops working, or even, it stops when you increase the engine speed.

Today we find out how to restart a stubborn chainsaw. Often the problem is easy to troubleshoot, whereas at other times you need to do a little more investigating, even if a novice can still easily figure out the problem. In other cases, however, you need to contact a specialist. Let's take a look at some specific issues.

Why and what to do if your chainsaw doesn’t start

We were saying that more often than not, the reason why a chainsaw won’t start is very simple to identify. First make sure that:

Speaking of fuel, alkylated mixtures keep longer than normal mixtures: for a chainsaw we suggest you use Oleo-Mix Alkilate for 2-stroke engines. Alternatively, you can use an additive for petrol fuels, like Additix 2000 Evo, which prevents deterioration of petrol and mixture for at least 12 months.

Then try starting the chainsaw according to the steps in the manual:

If a petrol engine chainsaw won’t start, it is usually due to an engine malfunction, specifically relating to the fuel system (which mixes the fuel with air and feeds this mixture into the engine’s combustion chamber) or ignition system (which produces the spark that starts combustion and thereby causes the engine to operate).

Start by checking the spark plug: if the electrodes are rounded and the gap is wide, the spark plug is worn, so it won't provide the spark needed to ignite the fuel-air mixture in the engine’s combustion chamber. It has reached the end of its useful life, so replace it with the spare part specified in the chainsaw’s user and maintenance manual. If it is not worn, it may be sufficient to clean it and adjust the gap between the electrodes.

If the spark plug is in working order, check that the problem is not with the other ignition system components, such as the spark plug coil, cable or boot cap. To test the coil of an Oleo-Mac chainsaw, we recommend relying on the instrumentation available at our service centres. For details see how a coil works (relates specifically to brushcutters, but also applies to chainsaws and any other garden tool with an internal combustion engine).

If the ignition works but the chainsaw doesn’t start easily, or starts but does not accelerate correctly, the cause may be the fuel system and specifically the carburettor. The condition of the spark plug is a useful clue as to how well the air and fuel is mixing (besides indicating the general state of the chainsaw engine): if the spark plug is brown/grey, everything is fine. If it is black and sooty, the engine is running too rich (too much petrol, not enough air), whereas if it is white the engine is running lean (not enough petrol). An unbalanced fuel/air mixture, whether rich or lean, affects the fuel consumption and performance of the chainsaw: to properly adjust the carburettor of your Oleo-Mac machine, contact your nearest service centre.

If the chainsaw won't start, or starts and then stops and you find the spark plug wet with fuel mixture, it means that the engine is flooded (you will probably smell petrol). It happens when too much fuel enters the combustion chamber, possibly because you have pressed the primer many times. To restart a flooded chainsaw, follow this anti-flooding procedure (always with the chain brake engaged):

By the way, here's an in-depth look at why chainsaws become flooded and won't cut.

The cause of the chainsaw’s poor carburetion could simply be that the air filter is clogged with sawdust and dust, preventing air from reaching the carburettor. That’s why our top tip for keeping every gardening tool in working order is to take care of it: clean and maintain your chainsaw regularly and thoroughly, since neglecting it makes it less safe and more tiring to use.

Here you will find our instructions on maintaining chainsaws, a task that must include the machine’s two key components: the guide bar and chain. Regarding the latter, you can read our article on how and when to sharpen your chainsaw’s chain. 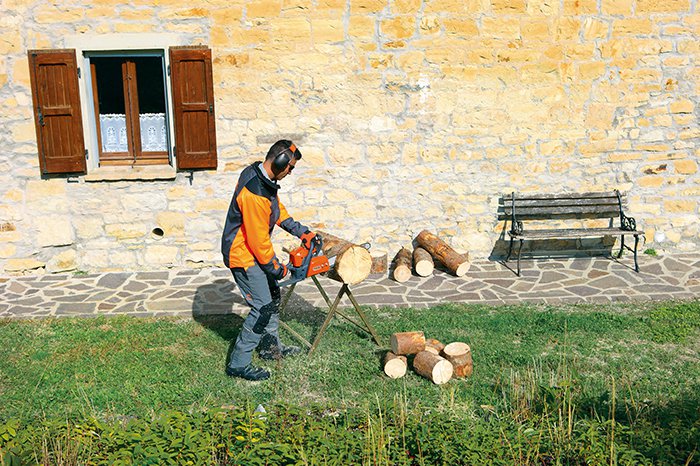 Why your chainsaw won’t cut and how to fix it

Regardless of the type of power supply (petrol or electric), you may find that your chainsaw starts but won’t cut because the chain doesn’t turn. After ensuring that the chain brake is disengaged, check what the cause may be:

If your non-starting chainsaw is electric

If you have an electric chainsaw that won't start, first make sure that the power cable is connected to the mains, then check whether the cable and plug are damaged. If they aren't, the problem could lie in the motor which, for example, may have worn or damaged brushes. In all cases, to fix your Oleo-Mac electric chainsaw, contact a technician at our service centres.

Purchasing the right chainsaw requires careful consideration, including the type of work you do and how often. You can opt for petrol engine chainsaws, electric chainsaws, battery-powered chainsaws, compact chainsaws, medium power chainsaws, professional chainsaws or pruning chainsaws. Too much choice? Here is some help on choosing the chainsaw that best fits your needs.

Chainsaws lend themselves to a wide range of uses: you can find an overview in our articles on tree pruning, cutting firewood and sawing up tree trunks.

A unique solution for different types of treatments.

Fruit plants: here's how to grow them in the city

Why does your chainsaw cut crooked? Causes and remedies

Good maintenance and technique are key